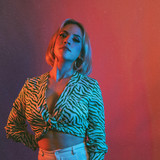 Known for her remarkable voice, emotional honesty and ability to translate difficult subject matter into rich pop songs, Cairns-based artist Greta Stanley has been on a rising trajectory over the past few years. Following her gorgeous debut album and two acclaimed EPs, Stanley has been busy putting the finishing touches on her anticipated sophomore record, due for release early 2022. In addition to her two singles with German writer/producer Tobias Kuhn (Milky Chance), the album will also showcase the vast skill set of Far North Queensland producers Tristan Barton (best known for his stunning soundtrack work) and Mark Myers (The Middle East, Emma Louise). Its widescreen sound broadens Stanley's palette, extending on her indie-folk roots to incorporate strong elements of pop, electronic music and R&B. “Coming from Mena Creek, a tiny town south of Innisfail and being based in Cairns for most of my 20s, I’ve felt so grateful to be able to collaborate with other local creatives for the recording of my new album," Stanley says. "I’m so proud to have the support of a great artist community up here. I can’t wait to share the album with everyone.” With millions of streams to her name, numerous festival appearances and a list of support slots that reads like a who's who of Australian indie pop (Amy Shark, Tash Sultana, Eves Karydas and countless others), now's the time to get on board this truly exceptional artist, if you aren't already. Contact: edward@doubledrummermusic.com