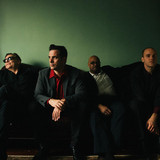 Mighty Joe Castro and the Gravamen

Modern sounds in rockabilly music: Based out of Philadelphia, PA, Mighty Joe Castro and the Gravamen is the latest musical project from accomplished collage artist and musician Joe Castro (ex-The Situation, The Lift Up). Heavily influenced by the sound of rockabilly as well as ‘50s rock-n-roll and doo-wop, the band takes that roots rock and roll sound but updates it with a modern lyrical approach and a healthy dose of post-modern guitar effects. Consider it a house that resides at the cross roads where Sun Records and Creation Records meet. According to Joe Castro: “We define ourselves as a rockabilly band because the term rock-n-roll these days has become so broad it’s completely meaningless. But I consider us to be a rock-n-roll band in the truest sense of the word, in the tradition of the pioneers of the genre like Buddy Holly, Eddie Cochran,

Johnny Cash, Bo Diddley and Johnny Burnette. My Dad grew up in Brookyln in the’ 50s, and would tell me stories about going to Alan Freed shows at the Paramount and seeing Chuck Berry, Jerry Lee Lewis and Buddy Holly. As a kid, those guys were legends to me. That beat was in my ears from a very early age. It’s in my blood. I’ve always loved it.” Rounded out by H00V3R on doghouse bass, Dallas on drums and Michael Stingle on guitar, the band recorded their debut EP, Wake Up, You’re Rockin’! with Grammy nominated producer Jim Salamone at Cambridge Sound Studios in South Philadelphia.