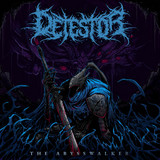 Since their formation in 2019, Detestor have been developing their sound blending deathcore aggression with death metal harshness, that was perfectly displayed on the band's relentless debut single 'Soul Devourer' featuring Lorna Shore's ex-vocalist CJ McCreery (which was his last work before that infamous incident). The second single 'Bloodline' continued exploring the heaviness with a variety of vocal patterns and brutal guitar work. The band does not plan to stop: the guys are almost finished writing their debut album. Detestor's new single "The Abysswalker" is a combination of filthy breakdowns, hard-hitting riffs and ruthless vocals with the help of Enterprise Earth's vocalist Dan Watson. The artwork and the lyrics drew inspiration from the 'Dark Souls' video game. The song tells us about the last minutes of Artorias' life, illustrating the process of his enslavement by darkness. "The Abysswalker" will definitely resonate with fans of Aversions Crown, Infant Annihilator and Lorna Shore.