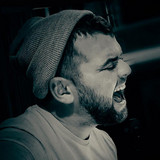 Named one of BBC Introducing in the East Midlands’ most played artists of 2019 and 2020, Michael Vickers is a British singer-songwriter from Leicester. His combination of indie-rock, folk, and heartfelt, anecdotal lyrics delivered with a raw, rap inspired vocal has had audiences describing his music as “clever, captivating, beautiful, vivacious, unique and spellbinding." "A bit of a legend on this programme. His lyrics are clever and he’s sensational live.” - Dean Jackson, BBC Introducing. Michael has performed at countless venues and festivals, including Glastonbury and 2000 Trees. As well as performing at De Montfort Hall Gardens in the summer of 2019 with his band, he has featured in promotional videos for Roland showcasing some of their latest musical equipment, signed publishing deals to BMG and has had his tracks placed in TV and Film. As part of BBC Radio Leicester’s Under The Covers show, Michael performed 'Fire' with Kasabian front man Tom Meighan. Michael's latest release - Poetic Nonsense - received an impressive amount of airplay, with 2 singles (Dead & Buried and When You Said That We Were Through) being selected as BBC Introducing in The East Midlands' Track of the Week.