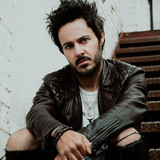 From South Wales UK, James Kennedy is a singer songwriter, multi-instrumentalist, producer & owns the music company Konic Records. As well as his solo releases, Kennedy was the former singer / guitarist with the alternative rock band Kyshera and has written in a wide range of styles including experimental, electronic, acoustic, alternative & orchestral - usually with highly politicised and philosophical lyrics. Kennedy has performed countless live shows, is an ambassador for several charities, speaks at seminars & writes articles on topics including mental health, the music industry & politics. His first book, the #1 Amazon Best Selling 'Noise Damage : My Life as a Rock'n'Roll Underdog' was published in 2020 and his latest solo album, 'Make Anger Great Again' is OUT NOW! Stay tuned for live dates coming up with his band 'James Kennedy & The Underdogs' soon! Check out Kennedys website at www.jameskennedystuff.com as well as his social media platforms (Facebook, Twitter, Snapchat, Soundcloud & Instagram) under the name JamesKennedyUK - and be sure to check out the @Kyshera page on Spotify too! Follow James Kennedy's Spotify page to stay up to date with new songs, b-sides, covers & more! This is a Movement