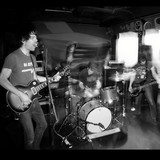 A Day In Black &amp; White

A Day in Black and White were a band based in Washington, DC who were active from 2001 to 2005. They have been described as post-punk, post-hardcore, experimental/indie rock and even post-emo. Their sound has been compared to bands such as City of Caterpillar, Sonic Youth, and Fugazi. They toured the US and Europe twice, releasing two LPs with Level-Plane Records: My Heroes Have Always Killed Cowboys (2004) and Notes (2005). After the band went on permanent hiatus, Mike and Aaron went on to form Protect-U and Dan started Fine Motor.