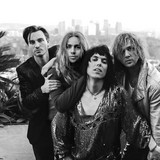 In just a few years, The Struts have found themselves massively embraced by some of the greatest icons in rock-and-roll history. Along with opening for The Rolling Stones, The Who, and Guns N’ Roses, the U.K.-bred four-piece was hand-picked by Mötley Crüe to serve as the supporting act for their last-ever performances, while Dave Grohl praised them as the best band to ever open for Foo Fighters. Formed in Derby, England, in 2012, The Struts almost instantly drew a major following with their outrageous live show, and later made their debut album, Everybody Wants (whose lead single “Could Have Been Me” hit #1 on Spotify’s viral chart). Before releasing their first album, the band opened for The Rolling Stones before a crowd of 80,000 in Paris and toured the U.S. on a string of sold-out shows. Known for his lovably swaggering stage presence—the very factor that gave The Struts their name— frontman Luke Spiller soon inspired legendary designers like former Queen costumer Zandra Rhodes to custom-create his lavish and glittering onstage attire. As Spiller points out, that heightened element of spectacle is all a part of the band’s mission of making an unforgettable impact on the crowd. “We believe in giving our absolute all every night, because that’s what our fans deserve,” he says. “The goal is always to get everyone dancing and screaming and shouting, and to make sure they leave dripping in sweat with huge smiles on their faces.”