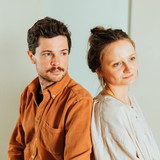 The Goudies (GOW-dees) are husband and wife folk-country duo — Sam & Beth Goudie. Their close harmonies and honest sound have drawn comparison with Americana artists such as The Civil Wars and Gillian Welch & David Rawlings. As singers and songwriters they explore the relationship of love, faith, and the spaces in between — always ending in hope.   At the start of 2021, whilst the UK was locked down, they started a weekly live stream (Tiny Show Tuesday) for their friends from their home, playing new songs and country covers — and finally decided to bring their solo projects together to form The Goudies.   Whilst The Goudies is a new project, Sam & Beth have both been well received as solo musicians. Individually they have both been featured as BBC Wales Artist of the week (Sam as Elephant & Soldier) and been played on BBC Introducing, BBC 6 Music, and local stations. They have also supported acclaimed artists such as Amy Wadge, Alfie Boe, and Jesca Hoop.   Their debut EP, When This is Over, is due to be released in July 2021. Recorded with just a single microphone in a room, the songs are an honest reflection on a time when everything was stripped away and we found out the things that matter.