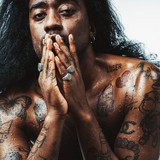 Since winning the prestigious newcomer award from the biggest broadcasting system in Norway in 2013, Arif has become one of the country’s most critically acclaimed and popular artists within his genre. The Oslo-born rapper was rewarded with a Norwegian Grammy for his successful mixtape HighEnd / Asfalt in 2015, which includes the bangers Flammer, Sulten, 7 - med Unge Ferrari, and Lowkey. He has played several of the biggest festivals in Norway to amazing reviews. His single Alene immediately A-listed on the biggest radio station in Norway, and soon became one of the radio-channels most played tracks. The song was nominated as “Song of the Year” at the same broadcasting system. In 2018, he got nominated for three Norwegian Grammys: Song of the Year, Urban, and Music video of the Year.   Arif is known for being a great live-performer, and in 2017 he played for a sold-out Oslo Spektrum, which is one of Norway’s biggest indoor arenas with partner-in-crime Unge Ferrari on the finale of their BBB tour.   His latest project MARS , which features Karpe Diem and Unge Ferrari, went straight to the top of the charts for several weeks.