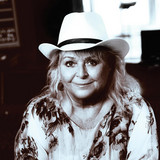 When releasing her album "Postcard From A Painted Lady" in 2015; 30 years after the huge hit "Good Vibrations", Kikki Danielsson took a big step away from the schlager world that most people place her in - since then her musical genre is country or maybe actually closer to what we call Americana for lack of a better name. It's more Loretta Lynn than Taylor Swift, more timeless than modern and here's a down to earth touch and a darkness that gives the songs a different dimension. Since the release of “Postcard from a Painted Lady”, Kikki has released another album and a Christmas album in what she now calls the "Painted Lady" trilogy. This was not the first time in her career that Kikki Danielsson has made a pure country record, though. As early as 1984, she went to Nashville where Kikki got to meet and sing along with several of her favourite singers. Her picture ended up on the wall of the Grand Ole Opry and sge was named an honorary citizen of Nashville. Kikki's latest single, "Några steg på botten" is the first taste of her upcoming album with country in Swedish. During the autumn of 2021 more music will be released.