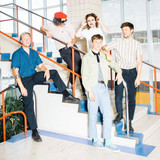 Rotterdam-based fivesome Iguana Death Cult initially made their mark with giddy, hard-hitting garage punk and a miasma of acid-drenched psychedelics, only to blossom into an all-embracing unit that implements frameworks of post-punk, krautrock, new wave, soul and disco. The band’s sophomore album Nude Casino, out October 25 on LA imprint Innovative Leisure, holds aloft a more cerebral and absurdist side of their songwriting.   For a band as combustible as Iguana Death Cult, only a deep and long-lasting friendship could supersede the sheer musical discord festering from within. Growing up together in the small town of Willemstad, the group formed when singer/guitarist Jeroen Reek decided to finally unite three of his mutual friends: guitarist Tobias Opschoor, aspiring guitarist Justin Boer and drummer Arjen van Opstal. Though Reek was teaching Boer, who is two years his senior, the guitar, a rock band with three guitarists seemed highly impractical. So the band insisted that Boer should take up the bass instead. At first, he did so begrudgingly, but with a deadline of three months till their very first show, he quickly learned to embrace it. The foursome camped out in an old powder house: quite a treacherous place for fervent, guerilla-style rehearsals, as the slightest spark could make the roof go kaboom.