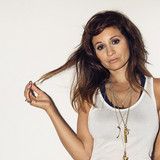 b. Hjällbo, Gothenburg, Sweden. This R&B-orientated pop singer enjoyed great success in her homeland and Japan before attempting to penetrate the US market in the late 90s. The teenage Brown teamed up with producer Anders Bagge for her debut single, November 1993’s ‘Heaven Come Down’. The song topped the Swedish charts, as did the following year’s debut album, Giving You My Best, a sub- Mariah Carey pop collection. In My Garden, the 1996 follow-up, was produced in Los Angeles, California by the experienced Rhett Lawrence, and featured Kim Carnes’ powerful ballad ‘When To Hold On’. Both albums sold well in Japan, but Brown turned her sights on America for her third album, Vera. The album, recorded with Philadelphia-based songwriter Billy Mann, eschewed the lightweight pop of her first two collections for a more groove-orientated approach. Meanwhile, the lyrics on stand-out tracks such as ‘Two In The Morning’, ‘Naked (When I Take Off All My Clothes)’ and ‘Tuesday Afternoon’ avoided the romantic clichés of her earlier material for a frank examination of sexual matters.