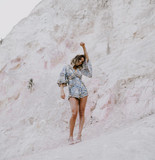 Ethereal melodies surrounded by ambient landscapes combine together creating a world of music, sentiment and emotion. Haunting vocals entwine powerfully with harmonies, strings, piano and orchestral drums, expressing the passion Imogen has for her songwriting and storytelling. Her music is enough to carve a niche in the current folk and pop landscapes. Imogen’s first single Heart released in 2014 was quickly selected as the theme music for the official Vidal Sassoon add in the US for 2014 and 2017, as well as featured on the Australia drama ‘Winners and Losers’, and ‘The Wrong Girl.' More recently, 2016 saw 'Love Is Like a Match' selected as the trailer music for both ‘Dance Academy’, and in 2018 for the Melbourne Theater Companies 'Shakespeare In Love' production.