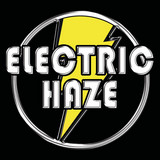 Swedish hard rock band Electric Haze was formed in 2014, and quickly wrote a couple of rock songs which they played live in and around their hometown Umeå, Sweden. Electric Haze‘s first single "Master & Slave" was released in 2016, followed by the singles "Endlessly" and “(Shut Up) Shuffle and Deal”. The self-titled 6-track "Electric Haze" was released later that year. In November 2020, Electric Haze released "Succuba", the lead single from the upcoming album ”GET IN LINE” (2021). In January 2021, Succuba was followed by the energetic rocker WOAH!.