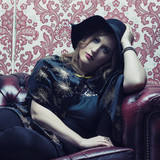 Caroline Gilmour is a UK. No. 1 selling singer and songwriter from Scotland. Her EP 'Electric Waterfalls' went straight in at No.1 in the UK Official Charts Company Vinyl Singles Chart and No.2 in the Physical Singles Chart on UK Record Store Day 2016.   Caroline is now one half of pop duo The Eves with Marissa Keltie. Performances include:   • Country to Country music festival at the SSE Hydro • TRNSMT Festival • Headline act at King Tuts Summer Nights Festival • Opened for The Shires at Old Fruitmarket in Glasgow   They are currently working on new music with Producer Lewis Gardiner. The single 'Love Will Find You' was released in August 2020, with more new music to follow in 2021.   Management: dcr@hanoicreative