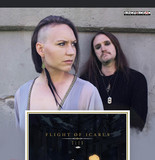 Sweden`s finest melodic duo Flight of Icarus returns with a grand cinematic pop-metal fantasy in ”Cleo”- their brand new album out on Blindfoldead International April 30th. March 2018 saw the release of the self-titled mini album ”Flight of Icarus” by the duo shamelessly named after the Iron Maiden song, which sparked a giant interest in their brand and style of music. With their new album ”Cleo” the characteristic voice of singer Elisabeth Särnefält Rösehag will lead you through a tale of magic and wonder beyond all limits, built on epic cinematic soundscapes by multi-instrumentalist Oskar Frantzèn. With a slight increase in edge and attitude since their 2018 lift-off and heavier sound overall, this album is their statement that in all simplicity - it`s only getting bigger from here. ”We have heard from the very beginning how we sound like a hard rock version of the Frozen soundtrack and the music of Disney overall” says Oskar Frantzèn. ”That`s like the biggest compliment we could ever get and it set the tone for Flight of Icarus moving forward.” The first single from the album ”Our Burning Star” was released at the start of February 2021 and "Fly Away" swiftly followed on 05/03/21. Both songs were well received by radio stations around the globe including regular plays on TotalRock, MMH Radio, Hard Rock Hell Radio and Wyatt from Planet Rock featured "Our Burning Star" on his New Rock Show.