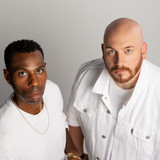 The Wake Up Experience

Brought together by a mutual love for music, The Wake Up Experience founders, Evan Bane and Ryz, met at Susquehanna University through friends who owned a recording studio. Evan Bane recorded rhymes, Ryz co-produced music, and the creative vibes flourished. Along with a few other classmates, they recorded 3 hip hop albums, performed at local venues, and opened for Grammy Award winning hip hop band, The Roots. Upon graduating, Evan Bane moved to Los Angeles to attend film school while Ryz made moves between NYC and Connecticut, writing and producing music. The two experienced a defining moment when Evan Bane traveled to Connecticut to work in the studio with Ryz. It was the first time they worked 1-on-1 and the creative synergy was powerful. They sensed a higher purpose for their collaboration emerging. Six months later, Ryz was driving across the country to relocate to Los Angeles. Although they knew music would be a key part of their journey, the duo still found themselves soul searching to more fully understand their purpose. They delved deeper into spiritual study, began practicing transcendental meditation, and embraced vegan lifestyles, setting them on a path of awakened expression. As their growth accelerated, so did the clarity of how this would manifest. Through the power of music, visual arts, and activism, The Wake Up Experience inspires peace, love, unity and justice for ALL humans, animals and the planet.