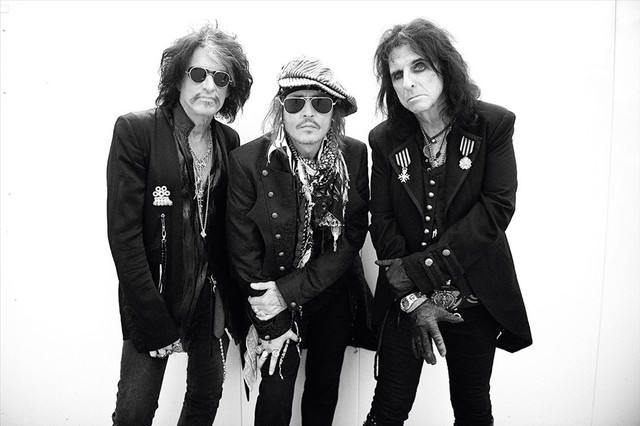 Back in the '70s, a group of rock & roll carousers called themselves the Hollywood Vampires as they crawled the bars of Los Angeles during the dead of night. Alice Cooper was at the forefront, joined by Harry Nilsson, John Lennon, Ringo Starr, Keith Moon, and Micky Dolenz -- a crew so soused that their tales became legend, even if the specifics of the debauchery were often forgotten. Forty years later, Alice Cooper revived the name Hollywood Vampires when he formed a classic rock supergroup with Joe Perry and Johnny Depp. In the spirit of the original Hollywood Vampires, a bunch of other stars were invited to play on the group's eponymous 2015 album; it boasted cameos from Paul McCartney, Dave Grohl, Slash, Joe Walsh, Perry Farrell, AC/DC's Brian Johnson, the Doors' Robby Krieger, and Winger's Kip Winger. Hollywood Vampires peaked in the Top 50 on the Billboard 200 and was supported by a tour. When it came time to play live gigs in support of the record, Cooper, Perry, and Depp brought in the Guns N' Roses rhythm section of bassist Duff McKagan and drummer Matt Sorum, adding Cooper's guitarist Tommy Henriksen as a third guitarist. In 2019, Cooper, Depp, and Perry resurrected the project for album number two. The resulting Rise features cameos by Jeff Beck and John Waters -- the pair appear on "Welcome to Bushwackers" -- and relies heavily on original material. ~ Stephen Thomas Erlewine, Rovi