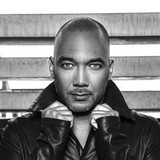 Imagine if A tribe called Quest, D'angelo and N.E.R.D. had a baby. That's FutuRe ParAdox!

In 2021 Ruben will start production on his new project FutuRe ParAdox in Amsterdam. This project is inspired by 90's hip hop beats laced with smooth R&B vocals. Ruben was born on the Caribbean Island of Curaçao and started singing and dancing when he was 7 years old.  At 15 he had his first performance on Dutch national television for the Miss Beautiful Black Pageant. At 18 Ruben moved to Amsterdam where he was accepted to the Theater School. After school Ruben has toured with Ruth Jacott, Enrique Iglesias and Mr. President.  Ruben played the lead role in the musicals Fame, Carmen Cubana and Hair in Austria and Daddy Cool in Holland. In 2019 Ruben was part of Team Anouk in the Voice of Holland. After the Voice Ruben started a crowdfunding campaign for his fourth project Blue Light Frequency. He raised 10.000 Euro in three weeks and started production on the project in Amsterdam, releasing his first single Always on my mind successfully on Spotify. Blue Light Frequency was inspired by Ruben's travels around the world and the people he met along the way. "I realized that at one point in time we were all one people: in French Polynesia the local traditional music is exactly the same the music as in the Caribbean and these two areas are miles apart from each other"  In 2020 played 4 SOLD OUT shows in Amsterdam in a year filled with Covid restrictions. A good sign of what's to come.