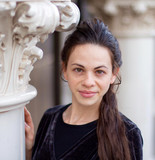 Denae Joy grew up in a family that loved music. From an early age, she was given many opportunities to sing in the church her father, David L. Abbott, founded. Later, she and her parents began traveling - preaching and singing in churches across the nation. Denae had a heart for God, for ministry, for people; singing of hope and salvation was just exactly what she wanted from life. As she began to develop musically, Denae discovered a God-given gift for songwriting. Around age 13, the inspiration to write was in full swing. Soon her local congregation, as well as audiences at conferences and other venues were blessed by the meaningful and anointed songs coming from her pen.   When Denae was a young teenager, her dad suggested that it might be time for her to start working towards a solo CD. That first recording dream became a reality at the end of 2008 when Denae was 14. "Love Song" was widely received and enjoyed; it gave Denae a musical foundation on which she has continued to build to this very day. She now has 7 albums available and a wide-spread audience that have come to love her unique sound. This beloved artist is now known for her original lyrics and melodies that are well-written, poignant, and produced with the highest quality of musicianship. But, mostly her listeners appreciate her pure voice and spirit, as well as the anointing that accompanies her songs as she lifts her voice to worship her God and bless His people.