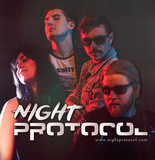 Night Protocol was formed in Burlington, Vermont, and has actively been performing and writing music since 2017. Night Protocol was created to unite the sounds of the past, present, and future with a cutting-edge style of electronic music. Fueled by synthesizers and a devotion to the sounds of the 1980's, Night Protocol performs their own blend of retro synthwave as a live band. Night Protocol shows are driven by live analog synthesizers, MIDI-triggered drum machines, intricate basslines, ripping guitar solos, saxophone leads, and harmonized vocals. Their live shows take a theatrical approach to music performance with coordinated visual lighting effects and a contagious sense of passion and energy for the foundations of electronic music. http://nightprotocol.com