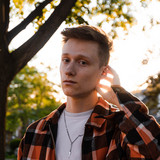 “Skies never the limit.” Paper Skies is a melodic bass producer and graphic designer based in Toronto, Canada. Known for fusing his signature liquid and crystally melodic textures with the sounds of today's modern dubstep, Paper Skies has been recognized as a key contributor to the rising genre of Color Bass through various releases on Rushdown, Lacuna, Buygore💀 and Ophelia Records. His engagement and positive attitude within the music community has led to various features on Rolling Stone, XO Radio, Heard It Here First, Dancing Astronaut, GRiMEFEST and community playlists by Soundcloud and Discord, along with support from mainstage acts such as Au5, Adventure Club and Chime. In 2019, 04 Collective was launched as an independent record label managed by Paper Skies which in its single year of operating massed over 3 million streams across 40 singles, giving artists such as Famous Spear , JoeB, Rusherz, Jeto and Ehallz a home for releases. The label has since ceased operations under the implications of returning with a compilation in the coming years. The current discography can be found here: Discography Management: c@segethentertainment.com Bookings: treyolympia@bassarmycanada.com Inquiry: paperskiescontact@gmail.com