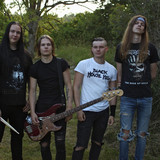 Formed in 2015 by vocalist Alex Gadde and Bassist Erik Pelz who found out quickly that they shared a passion for rock and metal music when they were in the same class in secondary school. They started to jam Metallica tunes together in Alex garage and were soon joined by Leadguitarist Nils Leufvenius and original drummer Tobias Engelbrektsson and started to write own songs. The band were going through several drummer changes and were later on joined by drummer William Martinsson, who saw the band at a local gig. With a personal and musical chemistry the band started to write their second album "Release The Bullet" which were going to be their second full lenght studio album and the first release with William on the drums. Their vision with their music is to show that rock and roll lives and that the younger generations also deserve a spot in the Swedish Rockscene. They want to go as far as possible and they want to get out their music to all kind of target groups and not just be stuck in the same old audience. The band is unsigned and they are recording and releasing their music on their own. When it comes to the live part the band is giving 100% all the time and they are not afraid to use the whole stage. Line-up: Alex Gadde - Rhythm guitar, lead vocal Erik Pelz - Bass, backing vocal Nils Leufvenius - Leadguitar, backing vocal William Martinsson - Drums