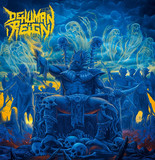 DEHUMAN REIGN is a Berlin based Death Metal band established in 2011 and committed to the US American old school sound of the nineties. These five experienced metropolitans rock Germany's stages since 2012 and released their debut EP „Destructive Intent“ (F.D.A. Records in 2013), which received favourable reactions from critics as well as fans. The attentive listener can expect furious blast beats, heavy mid tempo, neckbreaking grooves but also sophisticated solos, with traceability and comprehensibility not ignored either. In 2016 the full length debut „Ascending From Below“ followed, on which the band's strengths were further developed. DEHUMAN REIGN should be a delight for every Death Metal fan, no matter whether he prefers old school or modern brutal sounds. Currently, the band is finishing their upcoming album,

which is scheduled to to release in 2020.