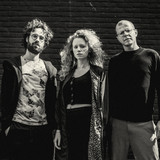 The Belgian-Dutch synthpop trio Fortress makes atmospheric electronic popmusic that is carried by the unique and dreamy voice of Hanne Torfs. Together with Dutch producer Ruben den Brok, Torfs has developed a unique and sultry sound, which is backed by the electrifying bass synths of Nils Tijtgat (Team William, Protection Patrol Pinkerton). Alluring, yet bold and danceable. ‘Wanderlust’, their first single released in 2018, has already drawn attention from both Studio Brussel and Radio 1. At the moment, Fortress is working on their debut EP which is expected next year. In the months leading up to their forthcoming EP, the band will be releasing several singles of which Moonchild is the next one. On May 22, the band will release a cinematographic concert movie, directed bij award-winning Tijs Torfs. For fans of adventurous electronic acts like The Knife, Chvrches, Goldfrapp and Robyn.