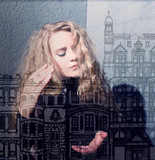 Jenny Gabrielsson Mare is an artist, musician, songwriter and producer born close to the polar circle, but now based in Stockholm, Sweden. She is also the sinister vocalist of the dark wave duo White Birches.   Gabrielsson Mare has released three solo album plus two albums and two EPs together with Fredrik Jonasson in White Birches.   COMB THE WICKED In November 2016 Jenny's third solo album "Comb the Wicked" was released in Scandinavia and on September 22 2017 it was released world wide. Writing the album she spent a month alone in Brooklyn. The songs are inspired by the atmosphere in the borough - from industrial noise to gospel and the songs are based on voice, piano, organ and percussion.   The album was produced by Jenny Gabrielsson Mare, mixed and co-produced by Ruben Engzell at Studio Ljudriket. Percussions by drummer Michael Blair.   THE RITUAL In februari 2013 Jenny Gabrielsson Mare released her second solo album "The Ritual", exploring the darker side of human behavior in form of dreams and unwanted desires. Including the Twin Peaks inspired single Black Lodge.   The Ritual was produced by Jenny Gabrielsson Mare and coproduced by Katharina Nuttall who also mixed the album together with Lotta Wenglén. String and horn arrangements by Hans Olding   BLACK STARS Jenny Gabrielsson Mares debut album Black Stars was released in the fall of 2010. The album was arranged, produced and mixed by Katharina Nuttall.