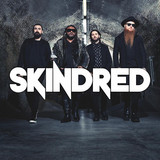 By the time a band gets 20 years into their career, you probably think you’ve got them pegged, right? You hear the name Skindred and you think of those Newport ragga-punk-metallers that have forged a reputation as one of the UK’s most formidable live acts by rocking the world’s biggest stages, winning Kerrang! and Metal Hammer Awards for their efforts; of the loudly dressed frontman with the even louder voice – and, of course, the now legendary Newport Helicopter. But, too often people forget there’s a fuel that gets those huge crowds jumping, namely the four-piece’s six studio albums to date: Babylon (2002), Roots Rock Riot (2007), Shark Bites and Dog Fights (2009), Union Black (2011), Kill The Power (2014) and Volume (2015). It’s an oversight the band is keen to correct. “We’re not just a great live band,” says bassist Daniel Pugsley. “We’re a great fucking band – full stop. The new album will definitely show that to the world.” “If you think this is just another Skindred record you’d be wrong,” adds drummer Arya Goggin. <br>&nbsp;“The beautiful thing about Skindred is now you’ve got an album for every day of the week,” says Benji of another of Big Tings’ accomplishments. “Most people rest on a Sunday, but if you stick this on, it’s going to take you on a journey. It’s not always going to be the one you expect: it’ll break your heart in some places, and have you breaking out your best outfit in others, ready to go out and achieve big tings!”