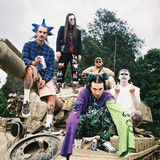 DREGG make powerfully energetic music, driven by themes of fierce individualism, with a sound that hungrily consumes metal, hardcore, and rap, only to heave it back up in a colorful rainbow of bombastic brutality and iconoclastic absurdity, lovingly fed to the audience like mother birds.   DREGG is as much a rifftastic metalcore outfit as they are unpretentious art-rock collective. The Melbourne, Australia fivesome is thrillingly provocative, occasionally disturbing, and filled with hip-hop swagger. The medium is the message, in their music, their tongue-in-cheek videos, and the exaggerated manifestations of each member’s “id” presented via elaborate theatrical costumes.     Mackertich, McQuitty, guitarist and producer Sam Yates, bassist Aiden Zovic, and drummer Horhay Delalopez describe themselves as “five carbon-based creatures that are utilizing our time on Earth to perform rhythmic audio.” Those performances earned coveted spots at Sonic Temple in the U.S. (alongside Slipknot, Red Hot Chili Peppers, Tool) and Download Australia.   Painted faces, crazy masks, discordant visuals; no matter how weird, DREGG offers much more than shock value. This is music and art intended to provoke and inspire. If there’s one major takeaway intended for the audience, it’s to unleash the weirdo within. DREGG aim to push the boundaries of self-expression, open up conversations, and the move the crowd while they do it.