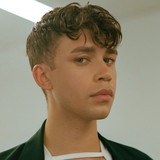 As a biracial military child, raised globally from Iceland to Virginia, Jeremy McClain was bound to be “other.” That eclecticism has been fused into his music, which blends multi-genre sensibilities through his filter. With features in Vogue Italia, V Magazine, L’Officiel, and CR Fashion Book, to name a few, the multi-hyphenate is best known for his portrayal of Cubby Abundance on the Golden Globe & Emmy nominated, Ryan Murphy-helmed television show, Pose. As a proud LGBTQ+ advocate and activist, he is passionate about using his platform to embolden and empower the community.