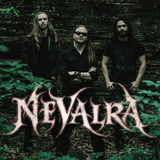 a one man band to a full lineup; thus bringing NEVALRA out of the Studio and to the Stage. In 2015 NEVALRA released the EP "The Black Flame"; which was included at #6 on the MetalSucks.net TOP Metal Albums of 2015 among the likes of Lamb of God, the Black Dahlia Murder, August Burns Red & others. NEVALRA is Signed to a Worldwide Record Deal with M-Theory Audio, and released the full length album "Conjure the Storm" in Summer 2019 while on an extensive European Tour supporting black metal giants Carach Angren. The band is tackling a relentless Worldwide Tour schedule and has performed in 21 countries to date. With Tours set for both inside and outside the USA, NEVALRA is out to conquer even more territory. NEVALRA has been featured in Decibel Magazine, MetalSucks.net, BraveWords, Sick Drummer Magazine, RockHard.de (Germany), No Clean Singing, Metal-Temple, & many more Worldwide publications. “Now I know what all the NEVALRA fuss has been about, as it appears their ascension to the black metal throne is imminent.” - WeLoveMetal.com