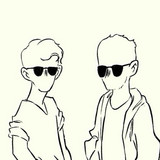 Near x Far is a music duo formed by Lliam Taylor & Deflo. After collaborating for many years from opposite sides of the world they have decided to combine their styles and bring you fresh Beats with Lliam's lead vocals.   With the success of their track "Spotlight" gathering millions of plays they released "Reflections" shortly after and hitting millions aswell.   Deciding to go fully ahead with this project they have kicked off 2020 with an official remix of "Marshmello, Blackbear & Yungblud - Tongue tied" which was released via Interscope Records.   The future is set to be big for Near x Far as their sound calls for universal domination.