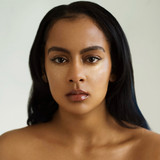 Vocalist and songwriter Bibi Bourelly is a bold and outspoken talent whose music -- a mix of pop, rock, and R&B -- is informed by a life that's been far from conventional. She was born in Berlin, Germany on July 14, 1994. Her father was Jean-Paul Bourelly, a guitarist who released 12 solo albums and collaborated with Elvin Jones, McCoy Tyner, Cassandra Wilson, and Craig Harris, while her mother was the director of the art department in Berlin's House of the World's Cultures. Bourelly was a rebellious spirit from an early age, and after her mother succumbed to cancer when she was six, the youngster developed a keen sense of self-reliance. Bourelly's reluctance to conform made her a poor fit for school. When she was 16, she left Germany and relocated to Washington, D.C. to strike out on her own. Three years later, she moved to Los Angeles and worked odd jobs while trying to get her foot in the door of the music business. Bourelly began working with producer Paperboy Fabe, whom she met online, and through him she met Kanye West, who brought her into the studio and put her in a vocal booth to see what she could come up with. The end product was the song "Higher," which was recorded by Rihanna, who was pleased enough with the tune that she turned to Bourelly for more material. Bourelly subsequently co-wrote "Bitch Better Have My Money," a number 15 pop hit for Rihanna. Additional co-compositions for Nick Brewer ("Talk to Me," a Top 20 U.K. hit) and Selena Gomez ("Camouflage") were out by the end of 2015, as was Lil Wayne's "Without You," on which Bourelly was featured. That year, she also signed to major-label Def Jam as a recording artist and issued her first commercially released solo singles, "Riot" and "Ego." The following year brought a handful of additional singles in support of two EPs, Feel the Real, Pt. 1 and Feel the Real, Pt. 2, that ranged from acoustic pop to trap-rooted R&B. The former release featured her father on "Guitar." Also in 2016, Bourelly co-wrote songs that appeared on Rihanna's Anti and Usher's Hard II Love, and she appeared on Little Simz's "Bad to the Bone." She returned in 2017 with her third EP release, BOY, which featured stripped-down, unplugged versions of fan favorites, as well as a new song, "Sunshine." The effort boasted accompanying videos of in-studio performances, with intros to each track in which Bourelly revealed her inspirations. In August 2019 she returned with the single "Wet," the first track from her full-length debut album. ~ Mark Deming, Rovi