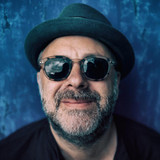 Mathias Berchadsky (El Mati) was born into a family of artists and musicians where he was surrounded by music from an early age. This early musical influence prompted him to pick up the guitar at age 12. Guitar appeared to be a natural choice for him and he spent the first ten years

to study with some of the greatest jazz musicians , such as Larry Corryel, John Scofield, Mike Stern, etc to name a few.. He then moved to Paris where he gravitated and experimented with Tango music of Argentina as well as gypsy jazz, Musette and other forms of music, popular and classical. It was during this period where he slowly abandoned the electric guitar in favor of acoustic nylon string guitars which could produce more closely the sound that he sought. It was in 1998, when for the first time he was exposed to the flamenco music. The profound effect of that experience could only be measured by the fact that soon he was on his way to Spain. His formal flamenco training with Eduardo Rebollar, Nino de Pura, Paco and Miguel Angel Cortes and Miguel Ochando among others have led to a succession of journeys to Granada and Seville . As a sought after accompanist of vocal and dance