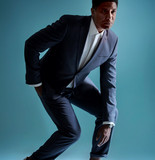 Edwin Hosoomel is a Panama born singer-songwriter. He has lived the last decade in Germany, calling Hamburg... home.   Assigning a genre to Edwin’s work is a difficult task due to his musical versatility. Armed with a loop device and a sultry voice, Edwin takes you into classical emotions together with experimental compositions and the raw energy of independent music. The result? ...a very minimal, elegant, but still powerful sound.   In June 2019 Edwin was honored with the Hamburg Music Award “Krach & Getöse” as “Best Newcomer 2019” chosen by the Hamburg Music Institution RockCity e.V.   In addition to having participated at renowned festivals such as MS Dockville, Reeperbahn Festival, SKANDALØS Festival, Millerntor Gallery Festival, among others, Edwin has worked with artists such as Señor Loop and Cienfue. His debut Album Lighthouse was chosen as “Best of 2018” by Beehype. He is currently working on his second Album “Caribbean Diablo”, which unfolds a beautiful combination of Latin and European sounds.   His debut single Games in the Darkness was released on March 03, 2017. A couple of weeks after the release Edwin was chosen by the German radio station Detektor.FM as "Best Newcomer" and recommended by the French magazine Les Inrockuptibles as "Must-to-listen artist". After these accomplishments, Edwin released his second single Doo Wop (That Thing) as a tribute to the amazing Ms. Lauryn Hill.