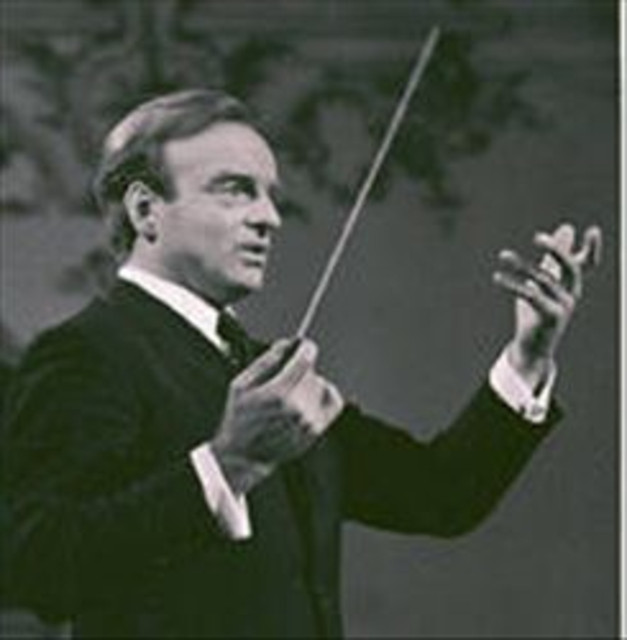 Karl Richter was regarded as one of the great Bach conductors of the twentieth century, noted for solid regularity in rhythms and a serious approach to the music, though he was not given to following the changing pronouncements of musicologists concerning historical accuracy in performance. He was brought up in the tradition of German Protestant religious music; his father was a minister in the central German regions near where Johann Sebastian Bach had lived. Richter learned piano and organ, and as he approached his 12th birthday entered the Kreuzschule school in Dresden. After World War II, he entered the Leipzig Conservatory, where he studied with Rudolf Mauersberger, and also studied at the Leipzig Institute for Sacred Music, where he learned Bach interpretation from Karl Straube and Günther Ramin. Very soon he was appointed choirmaster of the Christuskirche in Leipzig at the age of 20, and in 1947 became the organist of the Thomanerkirche, both institutions with strong Bach traditions. He left East Germany in 1950 to live in West Germany and settled in Munich, where he was organist of the Markuskirche and started teaching that same year at the Hochschule für Musik of Munich. He organized the Munich Bach Choir in 1951, and in 1953 added to it the Munich Bach Orchestra. His performances naturally centered on Bach and under Richter his musicians and singers became one of the most renowned organizations specializing in the music of the great German master and his era. The formation of the Munich Bach Chorus and Orchestra reflected a growing international interest in music of the Baroque and, sparked by the advent of the LP record, the notion of integral series of composers' works. Deutsche Grammophon's Archiv label was the first of such historic specialty sub-labels. Richter and his Bach Choir and Orchestra became a major pillar of that label and recorded numerous Bach choral works, gaining international recognition. They toured frequently, and Richter also played and recorded often as an organist and harpsichordist. In 1968, Richter made one of his most dramatic guest conducting tours when he conducted the St. John Passion and the B minor Mass in both Moscow and Leningrad at a time when religious music of any sort was rarely heard in the Soviet Union. Although his regularity of tempo (some called it inflexibility) placed him apart from the Romantic manner of performing Bach, Richter's performances otherwise retained the Romantic era's approach, stressing the solemnity of Bach's music and including dramatic large-scale dynamic contrasts. Newer research and the growing popularity of "original" or "period" instrument performances did not affect his interpretations, which used modern instruments. In some respects, younger interpreters who emerged in the 1970s considered him the representative of an approach against which they were reacting. Later in his career, Richter enlarged his repertory to conduct Classical, and even Romantic, era works, but tended to remain known primarily as a Baroque specialist. He is best remembered for his mastery of Baroque choral/orchestral works of the largest scale, where his architectural approach to the music is most effective. His recordings of the Bach Passions, oratorios, B minor Mass, and Magnificat, as well as Handel oratorios such as the Messiah, are considered his most important contribution to the Baroque discography.