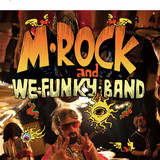 Emrik started out as a singer and bandleader of the powerhouse Swedish funk-hip-hop band Stonefunkers, They started their funk mission in 1988 with the single Turn it up. They released five albums, including the hit singles M-Rock theory, Can u follow, Funkadeena. The band toured around Europe for more than ten years and made a great impact on the Swedish funk and dance scene. Stonefunkers

were considered Sweden’s no 1 live band for many years. After a break up in 2001, Emrik made 4 albums in Swedish, the most successful being Lögnhalsen (2006). In 2010 Stonefunkers briefly reunited and Emrik got back to his funk roots. He first released the Funk Rock album AIRBORNE influenced by his skateboarding past. In 2014 M-ROCK & Wefunky Band