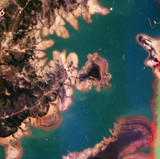 It was the release of «Temporär Musik 1-13» that got the ball rolling: One Sentence. Supervisor's second album was released in October 2016. The Swiss four-piece (in the meantime they grew to a five-piece) had previously released 6 of the 13 tracks from the album free of charge, immediately after they had been written and recorded. Between 2017 and 2019, they played various European showcase festivals, amongst others the Reeperbahn Festival (Hamburg), the Great Escape (Brighton), the Transmusicales (Rennes), the Waves (Vienna) and the MaMA (Paris). Furthermore, they supported Archive on their European tour in 2018. In fall 2019,

One Sentence. Supervisor released their new album «Acedia», produced by the producer/musician Radwan Ghazi Moumneh, aka Jerusalem in My Heart . On «Acedia», they sing the constant inner struggle between one’s powerlessness, hopes and fears. For fans of: DIIV, Pond, SUUNS, Kairos Creature Club, Jerusalem in My Heart , TootArd In spirit with: PJ Harvey , Ester Poly