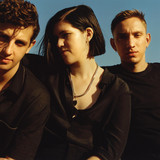 Atmospheric English indie pop group the xx formed in London around the talents of Romy Madley Croft, Oliver Sim, Baria Qureshi, and Jamie Smith, when the bandmembers were still in high school. Captivating and cool, the group cites influences that run the gamut from R&B (Aaliyah and Rihanna) to classic alternative rock (the Cure and the Pixies). Built around the duel vocals of Croft and Sim, the group's signature brand of moody, soulful indie rock first appeared on the public radar in early 2009 with the single "Crystalised," which created a huge buzz among critics and fans alike. The xx released their self-titled debut LP in July of that year in the U.K.; it was released in the U.S. the following month. Late that year, Qureshi was no longer part of the group; the rest of the xx released a statement via NME saying this was due to "personal differences." During 2010, the live dates continued, including spots at several high-profile summer festivals, and in September, their album won Britain's coveted Mercury Prize. Meanwhile, Smith worked with Gil Scott-Heron on the remix album We're New Here (in turn spawning the Drake song "Take Care," which sampled the pair's "I'll Take Care of U"). In mid-2012, a pair of singles, "Angels" and "Chained," heralded the release of the group's second album, Coexist, that September. The following year, the band's song "Together" appeared on the soundtrack to Baz Luhrmann's film adaptation of The Great Gatsby. The xx began working on their third album in 2014, and recorded in locales as varied as Marfa, Texas, London, Reykjavik, and Los Angeles. Jamie xx's solo debut In Colour, which featured contributions from Sim and Croft, arrived in 2015. Late in 2016, the single "On Hold" introduced the more energetic, eclectic direction of I See You, which was released in January 2017. ~ James Christopher Monger, Rovi