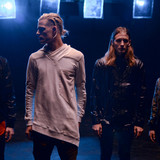 On June 17, I SEE STARS released their highly anticipated,

fifth full-length album, Treehouse. Taking their style of electronic hardcore music (EHM) to new levels, the band reaches deeper into the genre they helped build further surpassing all limitations. I SEE STARS exploded into the mainstream in 2011 after making their national television debut on the ABC late-night talk show “Jimmy Kimmel Live!” This coupled with being featured on the covers of Alternative Press and Substream Magazine and touring all across North America with Black Veil Brides on the “AP Tour” helped them gain legions of devoted fans. However, in 2012 the group had their most successful year yet with the release of digital_renegade, their third full-length album. This new effort was recorded with acclaimed producer Joey Sturgis (Asking Alexandria, Emmure) and the end result was a propulsive blend of aggressive music alongside build ups that spawn from the core of techno/dub-step/electro. This disc was highly regarded by fans and media alike as their best offering yet and yielded AMP and Outburn Magazine cover features. In 2016, Everyone will be safe in the Treehouse.