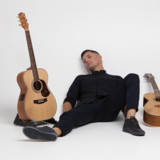 Mārcis Auziņš is one of most popular and well known guitarists in Latvia, playing with leading solo singers and legendary composers in different genres - pop, rock and jazz. In Autumn 2016 released his first solo album "Viens" ("One") arranged and recorded for only one instrument - accoustic guitar by Marcis himself. First album consists of twelve tracks of legendary Latvian composer Raimonds Pauls, but Marcis composes and performs his own songs as well. As composer and instumentalist he is emotional, fragile and powerful at the same time, his live gigs are filled with positive energy, laughter as well as intimate moments.