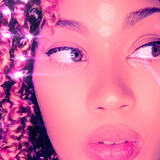 Manchester aka the Soul flower, gives you a nostalgic feel of Erykah Badu’s signature eccentrism. Minni Manchester was born the oldest of six children in Atlanta, GA. Her mother worked several jobs to take care of her and her siblings, resulting in Minni having to step up and help raise her siblings at a very young age. At the age of 8, Minni's singing voice was discovered by an after school teacher and she began singing at home and soon in church, then in school plays. Minni also started experimenting with different genres and writing songs at this age. It is from this that she learned how to create songwriting structures, melodies and rhythms that were pleasing to the ear. She would write songs daily to get away from her pain. In early 2020 her new single “Holding On” topped the Global Soul Chart at #1. Her most recent project titled "69" has been making buzz all over the world and features the grammy nominated artist Willie Hyn. Minni’s most recent single I.D.W.Y.N. Remix features the talented Durand Bernarr and is receiving lots of DJ spins globally. Minni’s 69 EP was also nominated for the 2020 independent blackout awards best soul album and her single Holding On was nominated for best soul single of 2020.