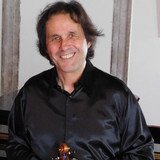 Volodja Balzalorsky is an internationally acclaimed violinist. He is Two Time Winner and Four-Time Nominee of Independent Music Awards. He is recipient of several further international music awards such as The Hollywood Music in Media Award, The Inland Empire Music Award, The Ontario Independent Music Award, The Canary Island Music Award, Julij Betetto Music Award. Numerous highly praised concerts, broadcasts, CD&TV recordings in various countries have established his reputation as an artist with a sensitive, intelligent, and intuitive gift of interpretation, a polished technique, and a rich, full tone. Volodja Balzalorsky has been a guest artist at international festivals and concert series in various countries such as Italy, France, Austria, Belgium, the United Kingdom, Germany, Serbia, Slovenia, Croatia, Bosnia and Herzegovina, Macedonia, the Czech Republic, Slovakia, Turkey, Portugal, Norway, Denmark Estonia, Lithuania, China and USA. Volodja Balzalorsky is particularly active in the field of chamber music. He works with many international groups and ensembles, . Critics comment on the degree to which he is able to develop and maintain unity with his musical partners in this milieu, presenting an exceptional harmony of ease and authenticity of performance. He is a member of renowned Amael Piano Trio-www.amaeltrio.com. For more than 35 years he performed in a duo with the pianist Hinko Haas (1956-2020). As a duo, they have received several international awards.