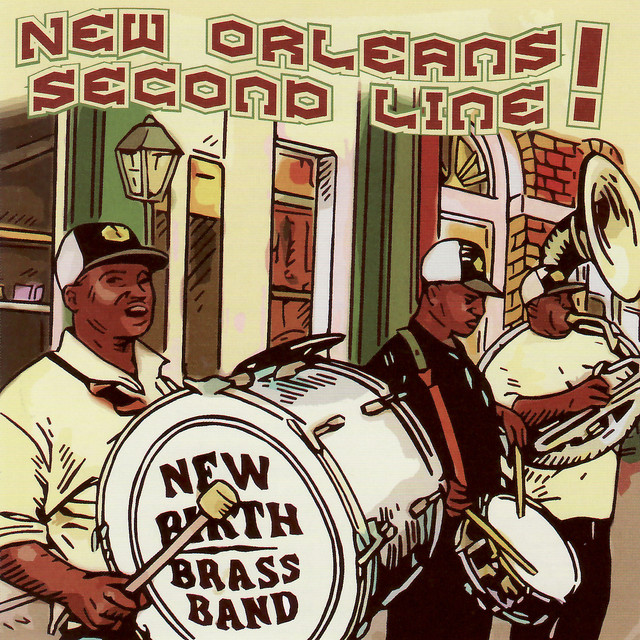 The New Birth Brass Band are part of a long line in the New Orleans brass band tradition, but their relative youth means their music yields an eclectic set of musical genres. New Birth's members are virtuosos who mix elements of blues, ragtime, gospel, funk, soul, rock, and traditional Crescent City jazz into their sound. The group’s albums include D-Boy, released by the NYNO (New York/New Orleans) label in 1997; New Birth Family, issued by Valley Entertainment in 2005; and New Orleans Second Line!, a 2006 disc on the Mardi Gras Records label. The beauty of this hard-working crew is that they're mainstream enough to appeal to fans of traditional brass bands, yet the eclectic range of styles incorporated into their live shows finds favor with younger fans as well. The group was an offshoot of the Young Olympia Brass Band, a group formed in part by Milton Batiste in the 1980s. On D-Boy, lead trumpeter and vocalist James Andrews is joined by trumpeter Derrick Shezbie (who also carved out a niche for himself as a bandleader in his own right in New Orleans), tuba player Kerwin James (brother of the Rebirth Brass Band's Philip and Keith Frazier), snare drummer Kerry Hunter, bass drummer Cayetano "Tanio" Hingle, trombonists Reginald Steward and Corey Henry, and percussionist Mister Action. James Andrews' background included tenures in the Roots of Jazz Brass Band, formed by Danny Barker in the early '80s. After a year as part of Barker's band, Andrews left to lead his own group, the All Star Brass Band, which included several of his brothers. Andrews also toured with everyone from Michelle Shocked to Wynton Marsalis, Danny Barker, Quincy Jones, and Dizzy Gillespie as a sideman. His eclectic background is reflected on D-Boy, which includes covers like "Whoopin' Blues," "Jesus on the Main Line," and "Li'l Liza Jane." The New Birth Brass Band has undergone a number of lineup changes in the new millennium, drawing members and collaborators from various other brass bands that call New Orleans home and gain strength from the city's history and spirit in often trying times. Recent bandmembers have included bass drummer Cayetano Hingle in the leadership role; trombonists Reginald Steward, Rob Harris, and Glen David Andrews; snare drummer Kerry “Fat Man” Hunter; saxophonist Darryl Adams; and trumpeters Kenneth Terry and Mervin Campbell. Tuba player Kerwin James -- a survivor of Hurricane Katrina like so many other Crescent City brass band players -- suffered a stroke in the summer of 2006 and remained in a coma until his death at the age of 35 in September 2007. In perhaps a sign of the changing city, with newly arriving residents unaccustomed to living with longstanding jazz traditions, the street parade in his honor was halted by police after noise complaints had been received; at least two musicians in the parade were arrested for disturbing the peace. But as James himself had said before his passing, "New Birth never dies, it multiplies," and the band has kept the spirit alive with new tuba player Rob Espino joining its ranks. ~ Richard Skelly & Dave Lynch, Rovi