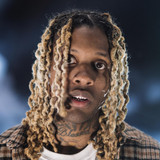 Chicago rapper Lil Durk began to catch on in the early 2010s when he was still a teenager, bringing pop touches to a raw lyrical style and helping set the pace for the melodic sound that Chicago became known for as the decade progressed. His fame grew as he grappled with various legal troubles, and he released multiple albums that charted in the higher regions of the Billboard 200, with Love Songs 4 the Streets 2 (2019) and The Voice (2020) both reaching the Top Five. Born Durk D. Banks, Lil Durk grew up in the Englewood neighborhood of Chicago's South Side. The rapper/singer started issuing mixtapes through his collective OTF (Only the Family) in August 2011 with I'm a Hitta and quickly followed it with I'm Still a Hitta (April 2012) and Life Ain't No Joke (October 2012), the latter of which came out just after the typically melodic and kicked-back "L's Anthem," his debut single for Def Jam. The same year, he was featured on a string of tracks with fellow Chicago natives and close associates like Lil Reese, Fredo Santana, and Chief Keef. "Dis Ain't What U Want," his second Def Jam single, was released in May 2013, just before his affiliation with French Montana's Coke Boys was made official. Durk's debut album, Remember My Name, followed in 2015 and featured Logic, Jeremih, and King Popo as guests. DeJ Loaf, Yo Gotti, and Young Thug landed on his 2016 LP 2X, which also featured the single "She Just Wanna" (with Ty Dolla $ign). In 2017, Durk teamed up with DeJ Loaf for the single "The One." Several mixtapes arrived during the year, including Love Songs for the Streets, Supa Vultures (with Lil Reese), and Bloodas (with Tee Grizzley). He continued into 2018 with Just Cause Y'all Waited -- which peaked just outside the Top 50 -- and Durkio Krazy, a collaborative tape with 808 Mafia's DY. Third studio album Signed to the Streets 3 appeared in November and reached the Top 20 of the Billboard 200. In February 2019, Lil Durk was involved with a shooting in Atlanta and faced criminal charges. While out on bail he released his fourth studio album, Love Songs 4 the Streets 2, in August of that year. Featuring guest spots from 21 Savage, Nicki Minaj, Meek Mill, and many others, the release became his first to chart in the Top Five. Before the year ended, Durk gathered his OTF crew for the Family Over Everything mixtape. The core group of OTF rappers were joined on some songs by artists like NLE Choppa and Polo G. Just Cause Y'all Waited 2, Durk's fifth studio album, appeared in May 2020, again charting in the Top Five. 2020 proved to be yet another prolific year for Durk, and he closed out the year with sixth studio album The Voice. Released in December, The Voice featured guest appearances from King Von, Young Thug, YNW Melly, and others. The album again rose to the top of the charts, peaking at the number three position. ~ Andy Kellman, Rovi