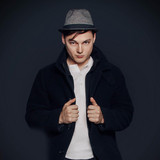 After fronting the band Seven Handle Circus for several years, being featured on Conan, People, Paste &amp; GuitarWorld, climbing the Americana Radio Charts, and supporting bands Mumford and Sons, Better than Ezra, and Zack Brown Band, Shawn Spencer ventures into alternative rock, with his new project. ​ "7HC was a beautiful thing that just kind of happened... we were a bunch of guys who started jamming and ended up with what was quickly becoming a very successful touring career.

But in the end it was more than some had bargained for and they wanted to settle down. Me... I'm just not prepared to settle". ​ The first move was hitting the studio and making a record with producer Grammy-winning, multi-platinum selling producer Billy Hume (Ludacris, Ying-Yang Twins, Infamous Stringdusters).