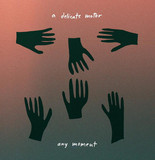 Originally a solo, loop-based songwriting effort by Adam Petersen, A Delicate Motor has expanded to incorporate drummer / producer Ben Sloan [WHY? / Lazy Heart / Naytronix / The National], and guitarist / bassist Stephen Patota [The Happy Maladies / Lazy Heart / Naytronix]. The trio recorded an album - Fellover My Own - with Henry Wilson of Pop Empire in the summer of 2016, and have since developed the ensemble to include vocalist Libby Landis, vocalist / guitarist Brianna Kelly of Soften and vocalist / pianist Rachel Mousie.   Fellover My Own arises from a quietude, within which, by way of gently cupped ears, we begin to hear messages beckoning the listener towards truth. It is the trifle of the human experience, that by endeavouring to manifest a higher self, or spiritual awareness, we paradoxically inhibit ourselves within our very striving. The messages here intend to relieve the listener from this paradox, of falling over one’s own devices, and instead begin to move with conscious choosing.