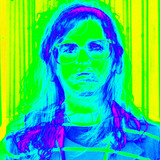 WRY is a rock band from Sorocaba, São Paulo, Brazil, influenced by shoegaze and post-punk, with songs in both English and in Portuguese. In addition to being an important force in the independent rock scene in Brazil, the band lived in London for years, with club tours throughout the UK and Europe, and appearing on larger festival stages such as Primavera Sound in Barcelona.   Noites Infinitas, WRY’s sixth and latest studio album, explores themes of anxiety, despair, and unconventional paths towards hope whilst living in today’s divided world. This powerful 10-song is out now.   Also, the band is releasing a series of Eps combining new songs with remixes from friends and collabs they met over the years. Check them out too!