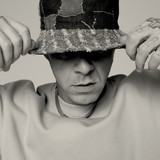 Born Maurizio Pisciottu in the Sardinian town of Olbia, rapper and producer Salmo recorded with Premeditazione and Dolo prior to making his own Under Skin in 2004. His first official album, however, was 2011's The Island Chainsaw Massacre, which was followed by Death U.S.B. in 2012 and Midnite in 2013. The latter would become Salmo's first number one album in Italy. Recorded while on tour in support of Midnite, Sony Music issued the live album S.A.L.M.O. Documentary in 2014. The rapper's fourth studio LP, Hellvisback, appeared in early 2016 and debuted atop the Italian album chart. It featured blink-182 drummer Travis Barker on two tracks. A versatile collaborator, he has also worked beside the likes of Skasico, Three Pigs Trip, and To Ed Gein. ~ Andy Kellman & Marcy Donelson, Rovi