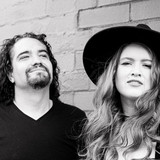 "Being creative is not a hobby. It is a way of life" ❤ Ride On, a new release from Scarlet's Way takes you through the ever illusive, yet often obtainable, euphoria that comes with chasing your dreams. 🎭 ♡ Scarlet's Way have already traveled a long way to carve out their name. From Western Australia to East Nashville, and many stops along the way, they've done some miles recently. But given their hunger to perform, this journey has a long way to go! Their trademark southern, roots-inspired brand of music brings lashings of Americana, accompanied by polished overtones synonymous with modern day Nashville. Like all seasoned musicians, these guys do their best work live on stage. The act has been invited to play on multiple stages at Tamworth CMF and obviously made an impression. These performances opened doors to Nashville's AmericanaFest and the Gympie Muster. Highlights of the duo’s performances include performing at the world-renowned Bluebird Café and completing a national tour performing at theatres and venues throughout NSW, VIC & WA. They also took out the Emerging Artist Showcase and performed on Main Stage in their first year at the Gympie Music Muster in 2018. They were then promptly invited back to be a part of a massive line-up in August 2019. Recently the band was awarded "Independent Group of the Year" at the 2020 WA Country Music Awards and were invited to close the Saturday night of Boyup Brook CMF with an electrifying set.