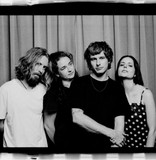 Heavily inspired by the loud, fuzzy guitars of shoegaze groups like Ride and the sweet melodies of dream pop artists like Slowdive, Melbourne, Australia's Flyying Colours formed in 2013 to make their own version of the sounds they loved. The band is built around the guitars and vocals of Brodie J Brümmer and Gemma O'Connor joined by bassist Melanie Barbaro and drummer Andy Lloyd Russell. First single, "Wavygravy," and a self-titled EP were issued in November of 2013. It was picked up for worldwide distribution by Shelflife in the U.S. and Club AC30 in the U.K. early in 2014. Touring and more recording followed, with another very similar EP seeing release early in 2015. The ROYGBIV EP was also released by the team of Shelflife and Club AC30. The band's debut full-length, Mindfullness, was issued by Island & Club AC30 in September of 2016. A busy international touring schedule followed including U.K. and E.U. headline shows, the bands first visit to China and tours with Johnny Marr, The Jesus & Mary Chain, The Black Angels and A Place To Bury Strangers at home.

2020 has seen the band sign to Poison City Records in Australia and the U.S. who alongside Club AC30 have released two singles "Goodtimes" and "Big Mess" from forthcoming second album "Fantasy Country".